Pablo Solón Romero was the most important face of the Plurinational State’s environmental and human rights diplomacy from 2006 to 2011. Last week, he became the latest critic of that same government to suddenly face criminal charges. On Friday, June 30, authorities delivered Solón a subpoena in a case against him and journalist Rafael Archondo. The pair had been designated Bolivia’s permanent and alternate representative to the United Nations. Now, they each face two charges of corruption for Archondo’s succession to the role after Solón resigned. The government alleges that Solón’s letter presenting Archondo to the United Nations constituted an unlawful usurpation of the President’s power to designate ambassadors.

For Solón, the investigation is an act of retribution.

In a statement released Monday, he declared:

The news wasn’t a surprise. Due to our critical analysis of the El Bala and El Chepete hydroelectric megadams, various friends had warned me that they would search underneath the stones to find something to accuse me of, to intimidate me, and to make me shut up. […]

I won’t refer at this time to the supposed crimes that we are accused of, since I will refute every one of them in a formal and public manner when I go to declare before the Prosecutor’s Office.

What I can say is that we will continue to think and we will continue to speak. Wherever we find ourselves, we will not renounce our ability to criticize and to state our opinion. It is most lamentable that rather than refute us with arguments, they seek to frighten us with this kind of accusations.

Pablo Solón, a Bolivian with a long history of radical and progressive activism, served first as its ambassador to UNASUR and later to the United Nations (Wikipedia biography|2010 Democracy Now interview). When the Bolivian government attacked the 2011 indigenous march in defense of the Isiboro Sécure National Park and Indigenous Territory (TIPNIS), Solón was one of several government officials to speak out, urging President Evo Morales to reconsider the proposed highway through the territory, a position he amplified once he stepped out of public service in 2012. After several years at the head of Focus on the Global South, Solón returned to working on Bolivian environmental issues at the La Paz-based Solón Foundation. Now, he has put his expertise to use challenging the government’s drive to build massive energy infrastructure projects in the Bolivian Amazon. 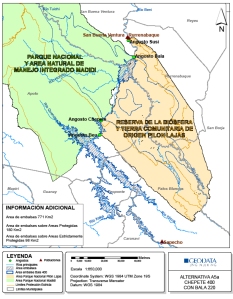 For the past year, the Solón Foundation has been critically analyzing the proposed El Bala/El Chepete dam project, which would submerge parts of Madidi National Park, Pilón Lajas Biosphere Reserve, and surrounding areas to generate thousands of megawatts of electricity. The project is part of a phalanx of megadams that the government proposes to produce electricity for export to its wealthier neighbors, Brazil, Argentina, and Peru. The government contracted with the Italian firm Geodata to draft a feasibility study for the El Bala/El Chepete complex in 2015, and Solón and the Foundation have taken a very public role in analyzing Geodata’s results (all posts on El Bala from the Solón Foundation). Last month, they concluded: “All the data that Geodata provides show that to build this hydrolectric dam today would be generate a deficit [rather than a profit], and would throw out a loss of  several tens of millions of dollars. Todos los datos que aporta Geodata muestran que de construirse hoy esta hidroeléctrica sería deficitaria y arrojaría una perdida de varias decenas de millones de dólares.”

In his July 3 statement, Solón continued:

The El Chepete and El Bala hydroelectric dams are not profitable at current electricity prices according to the Geodata’s own identification study. Bringing me to prison will not make these megadams profitable.

He suggested that the anti-corruption ministries’ time would be better spent investigating the waste of $11.8 million on a second Geodata study for a project that isn’t viability.

Last year, before he was targeted personally by the government, Solón penned a trenchant critique of the Morales government.

[2010] was the moment to strengthen more than ever the counter-power of the social organizations and civil society, to limit the power of those who were in the government, the parliament, the governorships and the municipalities. It was the moment to focus efforts on promoting new activist, creative leaderships to replace us because the dynamics of power were starting to wear us down. …

However, what happened was entirely the opposite. Power was centralized even more in the hands of the leaders, parliament was transformed into an appendage of the executive, clientelism continued to be fomented in the social organizations, and we even went to the extreme of dividing some indigenous organizations and attempting to control the judicial power through clumsy maneuvers…

Instead of the promotion of free thinkers who would encourage debate in all the spaces of civil society and the state, those who differed with official positions were criticized and persecuted. … This context, in which obsequiousness was prioritized and criticism was treated like the plague, encouraged control of the media through various means, undermined the emergence of new leaders, and strengthened the delusion that the process of change involving millions of people depended on a pair of individuals.

In response to the subpoena, Solón is now speaking about this pattern more personally:

It’s painful to watch the deterioration of a process of change that I had participated in long before the 2005 elections. At times, it seems incomprehensible how the people with whom you shared the same trench can waste their time preparing this kind of machinations. Nonetheless, this is not the first time this has occurred in history of social struggles and power, and we mustn’t let this make us lose hope for a different Bolivia in which the rights of Mother Earth and Vivir Bien can be a tangible reality.

The admiring fans who saw a beacon of hope in Bolivia’s process of change have been slow to listen to its critics from within. Seeing a major face of that hope undergo persecution make shake up that complacency, and Solón’s writing on the perils of power is a good place to start listening.

Update, March 2, 2018: The Prosecutor’s Office has rejected the denunciation against Pablo Solón and Rafael Archondo. Pablo Solón reports that once he read the notice, which was taped to his door, “I went back and read it again until I was sure. A smile grew across my face and with much effort I began to unpeel the adhesive tape.”