On Wednesday, February 17, a local protest in El Alto, Bolivia, became a national tragedy as flames engulfed several rooms of El Alto’s City Hall and six municipal employees died from inhaling the fumes from the blaze. 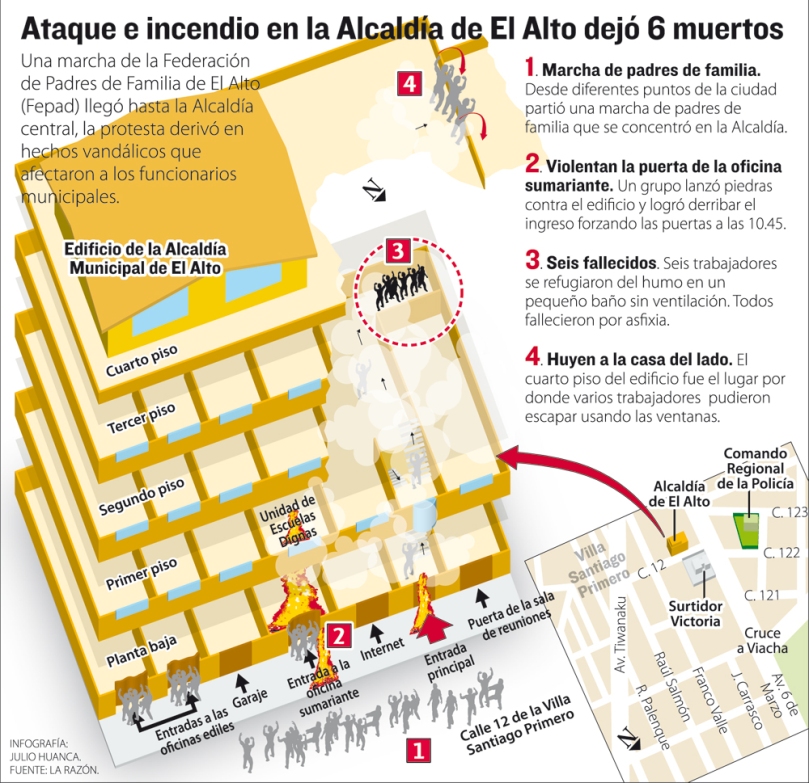 The protest, sponsored by the Federación de Padres de Familia de El Alto (an association of parents demanding better school facilities), arrived at El Alto’s City Hall at 9:00 am. Aggressive actions by the crowd, including using a rocks and kicks to break the front door lock, began by 10am. As protesters turned aggressive outside El Alto’s City Hall, Mayor Soledad Chapetón repeatedly sent messengers to the Regional Police Command, asking for help. (The police command is less than two blocks away, per La Razón’s graphic.)

Shockingly, they asked her to put her request in writing. A letter demanding police intervention “to safeguard the central City Hall … with anti-riot troops” was delivered to the police at 10:20am. A significant police attachment then took over an hour to arrive on scene. Protesters had seized numerous files and computers, set fires inside offices and on the street, and burned out rooms inside the building. Six municipal workers sought refuge in a rear bathroom of the building. The room was unventilated and they asphyxiated from the smoke. By the time the police arrived, the six employees had already lost their lives.

El Alto protests: Militant, destructive, but rarely deadly in the past decade

Neither property destruction nor the use of fire is unusual in El Alto protests, but these tactics have rarely led to deadly casualties. El Alto, Bolivia’s second largest city and the larger if poorer twin to the capital of La Paz, is rightly seen as the most militant place for urban protest in the country. During February 2003, protesters against a suddenly-imposed new income tax broke into government offices and burned files in El Alto and La Paz, including the property records in El Alto’s City Hall. The tax plan was cancelled. Later that year, El Alto saw the fiercest confrontations in the Gas War protests, opposing the export of natural gas by foreign corporations. Alteños’ militancy, however, is typically unarmed and involves the greatest use of force against security forces and property rather than individual opponents. While both of the 2003 events saw dozens of deaths in the city, they were nearly all protesters killed by police or military forces.

Since the 2005 election of President Evo Morales, security forces have been less aggressive in their use of deadly force on protesters. Militant crowds in El Alto have kept the looting of government offices and the setting of fires in their repertoire of tactics, used at occasional moments of public outpouring, such as the December 2010 protests against the removal of subsidies for fuel. As part of a national wave of protest, Alteños sacked and burned the toll booths on the main highway to La Paz. The protest was also marked by dissension as some pro-government organizations tried to dissuade protest. Their offices were looted by angry crowds. However, protest actions had not led to any deaths in El Alto between 2005 and this past week.

Evo Morales, who is seeking public backing for constitutional amendment allowing him a fourth term, has had a very bad month. On February 3, an opposition journalist revealed his 2007 affair with Gabriela Zapata, then a young law student who has since become exceptionally wealthy representing a major government contractor. The Vice President’s claims to academic credentials as a mathematician and sociologist have been called into question. But this deadly El Alto protest may have been the worst blow to the president’s image.

Many of the protagonists of Wednesday’s protest were affiliated with the president’s Movement Towards Socialism party, and they seem to have been protecting themselves from charges of local corruption through targeted arson, and killed six government workers in the process. The tragedy was compounded, and perhaps made possible, by government inaction. Once protesters had broken down the front door, they targeted the Investigating Unit (Oficina Sumariante) of the city government’s legal office. The head of that office told the press: “They came directly to attack first the Sumariante office and have burned my filings. What they were trying to cover up was the phantom billings, illegal contracts, and legally certified photocopies concerning the 33 vehicles that were to be sent for the [ongoing] criminal process, filings on illegal land occupations and charges.” The administration of former mayor Edgar Patana, affiliated with the MAS, is now under extensive investigation for corruption. Patana himself faces at least 11 denunciations of corruption and was jailed in San Pedro Prison last December.

Wednesday’s conflict pitted MAS affiliates against a City Hall led by Mayor Soledad Chapetón, affiliated with the center-right Unión Nacional. Two leaders of the protest singled out by the mayor in an emotional speech Wednesday night were Braulio Rocha and Wilmer Sarzuri, both MAS candidates for the El Alto municipal council in 2015. Rocha, leader of the shopkeepers union (Federación de Trabajadores Gremiales de El Alto) had been a close ally of outgoing Mayor Patana, whose administration redirected shopkeepers’ taxes into the control of the union. When Chapetón ended this practice, Rocha declared to Chapetón, “I will be your nightmare for the rest of your life,” reports El Diario. It now seems more likely that Wednesday’s deaths will haunt Braulio Rocha.

These elements of political dispute implicate the governing MAS party, at least on a local level. It might all look like a local crisis were it not for police inaction and the words of Marcelo Elío, the Vice Minister in charge of policing. Within hours of the fire, he blamed SOL.Bo for “provoking” the fire and described it as a self-directed attack (“auto-atentado”) and “a plan orchestrated from within City Hall.” Other national government figures initially emphasized the need for investigation and clarification of events. State-run media passed on allegations that vandals had “infiltrated” the protest causing the destruction, and the state-aligned Venezuelan channel Telesur even mis-captioned the event as an act by anti-Morales protesters opposed to the Sunday referendum. But by Friday prosecutors had accepted Chapetón’s version and arrested Rocha and Sarzuri, as well as two young MAS activists and charged them with homicide and other crimes. Even with these moves, death, corruption, and state complicity with both hang in air ahead of Sunday’s referendum on the future of President Evo Morales