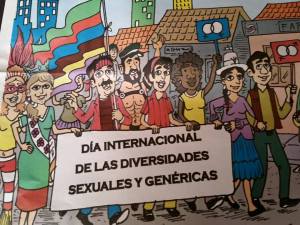 Los Cobocitos, a weekly segment in the Cochabamba daily newspaper Opinión, features a cartoon- and story-filled introduction to queerness of all ages. Co-produced by Bolivia’s Human Rights Ombudsman (Defensoría del Pueblo) and Unicef, it celebrates June 28 as International LGBT Pride day. It features drawings by kids against homophobia, stories of same-sex couples in their own words, and an explanation of the constitutional rights to equality for people of all sexual orientations and gender identities in Bolivia’s 2009 Constitution and its general antidiscrimination law. (The constitution does, however, define marriage as between one man and one woman.) There’s also encouragement to teachers to give “rapid and natural responses” when they hear anti-gay myths and a reminder to parents that “There are some moms and dads who think that if they avoid the issue, their children were be less likely to be homosexual and that’s not true. It’s the parents who need to inform themselves and break the chain of silence.” Didactic? Yes, but still adorable.