An assembly of Bolivia’s departmental Civic Committees has called on the government of Evo Morales to re-route a controversial highway to the east of the Isiboro-Sécure National Park and Indigenous Territory (TIPNIS). In their joint statement issued on July 20, the establishment organizations write,  “We categorically reject the Villa Tunari-San Ignacio de Moxo highway project for destroying TIPNIS and propose that the connecting of Beni and Cochabamba should be [instead] articulated along a Villa Tunari–Camiaco–Loreta–Trinidad route. Rechazamos categóricamente el proyecto carretero Villa Tunari-San Ignacio de Moxos por destruir el Parque Nacional y Territorio Indígena Isiboro Sécure (TIPNIS) y proponemos que la articulación entre Beni y Cochabamba sea: Villa Tunari-Camiaco-Loreto-Trinidad.” This alternative route is one of several that has long been ignored as the Morales government pressed to build a highway northwards out of the coca-growing Chapare and directly through the national park, inhabited by Mojeño-Trinitario, Tsimané, and Yuracaré communities who have campaigned against it for over a decade. I last reported on these option in 2012, when the Isiboro Sécure Defense campaign estimated that the route (number 2 on the map below) would be 250km in length, about 50km shorter than the project underway.

Bolivia’s civic committees are coalitions of mainstream organizations, equivalent to an amalgam of a Chamber of Commerce, assembly of government officials, church leadership, and charitable organizations. While in the 1960s and 1970s, they played a key role as an independent voice for civil society amid Bolivia’s military dictatorship, they emerged as a right-wing counterweight to the Morales government in 2005. The right-wing civic movement encompassed committees in the eastern and central provinces, while civic committees in Potosí, La Paz, and Oruro have tilted leftwards. (Oruro and Potosí civic committees have organized important protests making regional demands of the national government.) This week’s report of a joint statement represents an important new voice in the ongoing conflict. It builds upon an alliance of indigenous and center-right project skeptics that backed Carmelo Lens in the 2015 governor’s race in Beni department. As can be seen below, civic committees from Cochabamba, El Alto, Tarija, Oruro, Pando, Camiri, and Chuquisaca, issued the statement, in cooperation with TIPNIS leaders Fabian Gil, Marqueza Teco, and Fernando Vargas. 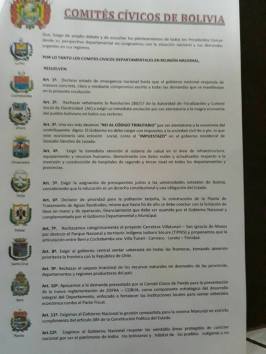 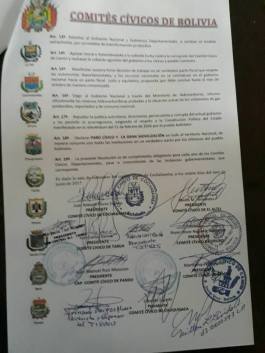 One thought on “Departmental Civic Committees: Build highway outside of TIPNIS”