Poverty is there, however, unbearable and discreet. On every page it manifests itself, in three elementary actions: carrying, scavenging, pilfering.

In all the capitals of poverty, the poor carry bundles. They always keep them close by. When they sit down, they place them by their side and watch over them. What do they put in them? Everything: wood gathered in a park, hastily, crusts of bread, bits of wire pulled off a fence, scraps of cloth. If the bundle is too heavy, they drag it along, in wheelbarrows or handcarts. 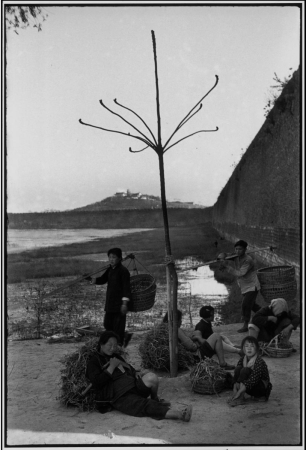 In all the capitals of poverty, people scavenge. They scavenge in the soil and the subsoil; they gather round refuse bins; they slip right into the rubble: ‘What others throw away is mine; what is no longer of any use to them is good enough for me.’ On waste ground near Peking, the rubbish piles up. This is the refuse of the poor; they have sifted through everything, they have already rummaged through their own rubbish; they have only left, reluctantly, what is uneatable, unusable, unspeakable, revolting. And yet the flock is there. On all fours. They will scavenge all day, every day.

In all the capitals of poverty, there is pilfering. Is it stealing? No, just picking things up. These bales of cotton have just been unloaded. If they stay an hour longer on the dock, they will disappear. No sooner have they been put down than the crowd rushes forward and surrounds them. Everyone attempts to pull off a handful of cotton. Many handfuls of cotton, gathered day after day – that makes an item of clothing. I recognize the look on the women’s faces, I have seen it in Marseilles, in Algiers, in London, in the streets of Berlin; it is serious, quick and hounded, anguish mingles with greed. You have to grab before you are grabbed. When the bales have been loaded onto a lorry, the kids will run after it with outstretched hands.

Every day the poor people dig, scavenge and gather.

The image above is from the Kariobangi Waste Management Alliance in Nairobi, Kenya, over 300 young Kenyans who have made a waste collection system for the slum of Kariobangi; photograph borrowed from this 2013 article. The image below is a photograph by Henri Cartier-Bresson taken in Nanking in April 1949. Original caption: “Peasants rest at the foot of the ancient walls of Nanking after collecting lotus roots for fuel. In the background: Jade Mountain, and the lake where sailors received their training during the days of the Ming Emperors.”