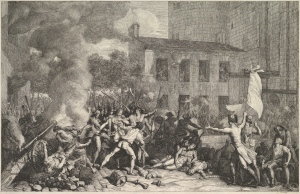 Historian William Sewell makes a striking claim about how the taking of the Bastille, 226 years ago today, marked not just the key moment in the French revolution, but an originary point for the very concept of revolution in the Western world. “It was by this process,” Sewell claims, “that the modern concept of revolution definitively entered French political cuiture, effecting a hitherto undreamed of but henceforth enduring articulation of popular violence to popular sovereignty.” The argument takes up a whole chapter in his book Logics of History (2005), and it’s worth your time, but here are three excerpts on the Bastille and its place. END_OF_DOCUMENT_TOKEN_TO_BE_REPLACED

A revolutionary is one who self-consciously advocates collective action to remake a society’s defining institutions through unconventional action, from below. Not just in the last years of his life, Martin Luther King Jr. was one such revolutionary.

Summer came, and the weather was beautiful. But the climate, the social climate of American life, erupted into lightning flashes, trembled with thunder and vibrated to the relentless, growing rain of protest come to life through the land. Explosively, America’s third revolution—the Negro Revolution—had begun.

For the first time in the long and turbulent history of the nation, almost one thousand cities were engulfed in civil turmoil, with violence trembling just below the surface. Reminiscent of the French Revolution of 1789, the streets had become a battleground; just as they had become the battleground in the 1830’s of England’s tumultuous Chartist movement. As in these two revolutions, a submerged social group, propelled by a burning need for justice, lifting itself with sudden swiftness, moving with determination and a majestic scorn for risk and danger, created an uprising so powerful that it shook a huge society from its comfortable base.

Never in American history had a group seized the streets, the squares, the sacrosanct business thoroughfares and the marbled halls of government to protest and proclaim the unendurability of their oppression. Had room-sized machines turned human, burst from the plants that housed them and stalked the land in revolt, the nation could not have been more amazed. Undeniably, the Negro had been an object of sympathy and wore the scars of deep grievances, but the nation had come to count on him as a creature who could quietly endure, silently suffer, and patiently wait. He was well trained in service and, whatever the provocation, he neither pushed back nor spoke back.

Just as lightning makes no sound until it strikes, the Negro revolution generated quietly. But when it struck, the revealing flash of its power and the impact of its sincerity fervor displayed a force of a frightening intensity. Three hundred years of humiliation, abuse, and deprivation cannot be expected to find voice in a whisper. The storm clouds did not release a “gentle rain from heaven,” but a whirlwind, which has not yet spent its force or attained its full momentum.

There is a second group of young people, presently small in number but dynamic and growing. They are the radicals. They range from moderate to extreme in the degree to which they want to alter the social system. All of them agree that only by structural change can current evils be eliminated because the roots are in the system rather than in man or in faulty operations. This is a new breed of radicals. Very few adhere to any established ideology or dogma: Some borrow from old doctrines of revolution, but practically all of them suspend judgment on what the form of the new society must be. They are in serious revolt against old values and have not yet concretely formulated the new ones. … Ironically, their rebellion comes from having been frustrated in seeking change within the framework of the existing society. They tried to build racial equality and met tenacious and vicious opposition. They worked to end the Vietnam war and experienced futility.

In their concern for higher social values [the radicals] were thwarted by a combination of material abundance and spiritual poverty that stifled a pure creative outlook. And so they seek a fresh start with new rules in a new order. … Their radicalism grows because the power structure of today is unrelenting in defending not only its social system but the evils it contains. … Whether they read Gandhi or Fanon, all the radicals understand the need for action—direct, self-transforming and structure-transforming action. This may be their most creative collective insight.

This second passage comes from “A New Sense of Direction,” one of King’s last overall strategic reflections before his assassination. It was delivered at a SCLC staff meeting and its private audience allowed for additional candor. If you want to read one piece on MLK’s strategic thinking, after a lifetime of organizing, this is it. On the other hand, if you want to read a whole book, buy Michael Eric Dyson’s I May Not Get There with You: The True Martin Luther King, Jr, and donate it to a library when you’re done.

I wrote the following comment in an online discussion during the Egyptian protests in early 2011. I’m reposting it here to ask questions of continuing importance for political ethnographers, and other social scientists.

In the wake of the American Anthropological Association’s release of a letter expressing concern about Egyptian artifacts (for 150 words) and Egyptian people (for 30 words), the AAA blog has allotted more space to the issue of the protests themselves.

The piece is called “We Are All Egyptian,” and begins “There are tens of thousands of Egyptians in Tahrir today. And there are millions of Egyptians who are not.” The writer, Yasmin Moll, is doing fieldwork in Cairo and devotes the piece to people’s changing and conflicted attitudes to the protests.

I’ll leave it to others (Zero Anthropology critiqued the AAA’s priorities here) to ask questions about what the AAA is not saying, about say the thousands of Egyptians who are official or unofficial detention today, or about the web of relationships between the United States and the regime.

What interests me about this piece is the quasi-political position of an ethnographic preference for uncertainty, indeterminacy, and the legitimacy of all sides. That is summed up in the following paragraph:

“From the vantage point of those of us in Cairo, however, the picture is much more complex, fluid and messy.  And simplifying it for the sake of a sexy story or a catchy headline risks marginalizing the many Egyptians from all classes and backgrounds whose political stances don’t fit neatly into one or the other of these categories.”

Strike out “in Cairo” or rewrite “a sexy story or a catchy headline” as “[insert academic or political purpose here]” and you get a handy template for justifying the use of ethnography. One I’m sure we’ve all read in one form or another. And one that many of us have used, or will have the occasion to use.

First question, though, isn’t this an argument against extracting meaning or seeking a pattern in any reality? Doesn’t this form of practice ask us to not draw conclusions from anything as complex and indeterminate as actual people? In this case, we’re talking about a reality that has electrified people across Egypt, and around the world. Would such ethnographic messiness written about Tunisia’s revolt last month have had the same mobilizing effect in Egypt as the stories that were told?

Second question, does it make sense to describe an anti-structuralist method as politically liberating? The narrative is familiar: Writers (unfairly) fit people into categories, missing what is important. But look at the political nature of the verb: “risks marginalizing.” The implicit argument is that writing about people in a way prioritizes, say, collective action over emotional uncertainty, is part of a power structure that pushes them aside. In this case, with a very visibly present power structure being shaken, the connection between the epistemological power of those writing about the uprising and the political power of those trying to suppress it is dubious, if not nonexistent.

Third, I wonder and worry about this kind of disciplinary positioning for anthropology. Having chosen to study how and when people form into collectivities (I focus on social movements, and on processes of revolution, in recent Bolivian history), I recognize in the AAA’s blog a position that says ethnography should be directed to the individual over the collective, to the messy over the galvanized, to the fluid over crystalized. I may be over-projecting my own research interests on to the AAA blog, but I also worry about a claim that “complex, fluid, and messy” is “real ethnography,” while studying large-scale social and political changes is not. Since Cairo now and Bolivia in the past decade are interesting moments precisely because of the coming together of thousands upon thousands of people, producing tangible political results, to make increasing complexity the goal of ethnography is to call for an ethnographic approach that misses the point of these transformative moments.

Thomassen, Bjørn. 2012. Notes towards an anthropology of political revolutions. Comparative Studies in Society and History 54(3):679–706.