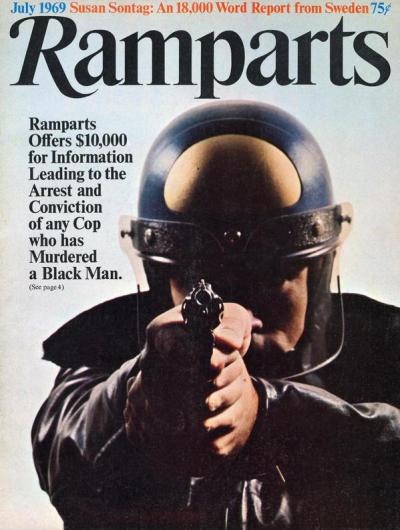 Forty-six years ago, the underground magazine Ramparts used its cover to draw attention to near impossibility of holding police accountable for killing African Americans. Thanks to #BlackLivesMatter and video evidence, arresting police for murder is now thinkable. But will there ever be a murder conviction?

2013 was something of a breakout year for the wider distribution of social-justice oriented cultural critique. The line between the online world of Twitter, tumblr, and feminist, queer, and antiracist blogging on one hand and nearly-mainstream and mainstream pop culture and celebrity coverage became noticeably thinner. Time and GQ ended up questioning Robin Thicke about the connections between his song “Blurred Lines” and sexual violence. Blog posts charging Lorde’s “Royals” (a song that was itself a cultural critique) with racism for focusing too much on hip-hop culture became a story on CNN. Rather than taking place in an alternative zine scene, our voices are now part of a global cultural conversation, capable of being amplified before millions of readers and viewers.

And yet this conversation isn’t just broadcasting insights, and opening minds. It’s arousing more than the inevitable level of defensiveness. And it has led many people, to question the ways that anger, vitriol, self-righteousness, shaming, and identification of enemies can be facets of activist culture. An amazingly perceptive version of this view is offered by Quinnae Moongazer in “Words, Words, Words: On Toxicity and Abuse in Online Activism.” She puts out a call for a more expansive and hopeful activism:

It is time that we took our convictions to their logical conclusion and set our sights higher than the call outs of particular points of failure evinced by some hapless individual; it is time we took the next step so many in our communities are already taking, to a social justice activism recommitted to changing social structures and not just creating echo chambers to declaim against what we have.

Too often in social change movements we take what could be opportunities for education and turn them into occasions for censure, and I think that’s a shame. How many potential allies do you think we’ve alienated this way over the years? Thousands? Tens of thousands? At any rate, more than a mass movement can afford to spare.

Leaving aside all my disappointments and frustrations, which echo theirs, I want to offer some proactive and hopeful ideas for the continuing work of critiquing and remaking our flawed, all-too-oppressive culture. END_OF_DOCUMENT_TOKEN_TO_BE_REPLACED

Union leaders stand alert during the national athem at the anniversary celebration of the MAS-IPSP party in Sacaba, Bolivia, 2011. The flag in the party's blue, white, and black colors has the face of President Evo Morales, and the text, "One country, One leader." It alternates with the checkered rainbow wiphala, an Andean indigenous flag.
_The Sovereign Street: Making Revolution in Urban Bolivia_ is out in the world! And as it's autho,r it's a pleasure to have it in hand. This book tells the story of Bolivia’s twenty-first century revolution based on the year I spent in the country interviewing protest participants and gathering information of all kinds about how hundreds of thousands of people acted together to turn back neoliberal policies, overthrow two presidents, and reclaim spaces of the city and parts of the state for Bolivia’s indigenous majority. I also narrate the emerging tensions between parts of the left grassroots coalition and the president they brought to power, Evo Morales. The Sovereign Street is at once an event-driven history of revolution in Bolivia, an insider’s how-to guide for the ways those events came together, and an analytical exploration of why these kinds of actions had the political impact they did. This book is for scholars who study social change and people who desire to bring it about, people who feel connected to Bolivia and its indigenous majority, and people who simply want to learn how racial and political power structures can be changed by everyday people acting together. You can get it too! Links in bio, use discount code AZFLR for30% off at University of Arizona Press.
Mural on the Cochabamba Central Post Office Building by Mona Caron (@mona.caron) celebrates Andean heritage, letters, and the city of Cochabamba. #ecobol #correos #postoffice #mural #artecallejero #andeancondor #textiles #streetart #lacallesoberana #sovereignstreet
Anarchist graffiti in Potosí: "Hope is Utopia's girlfriend and Freedom's lover." Graffiti anarquista en Potosí: "La Esperanza es novia de la Utopia y amante de la Libertad." #potosi #anarquismo #anarquista #anarchism #Bolivia #Potosí #graffiti #streetart #artecallejero #grafiteadas #lacallesoberana #sovereignstreet
The view up Perez Velasco, the central transport artery of La Paz, Bolivia where the El Alto–La Paz highway merges into downtown. #LaPaz #Bolivia #sovereignstreet #lacallesoberana
Mountains rise in the distance behind Cochabamba's Avenida Blanco Galindo, the main thoroughfare connecting the city to the Altiplano cities of Oruro and La Paz. #cochabamba #sunset #mountains #bolivia #sovereignstreet #lacallesoberana
A multi-story public market under construction in 2008 adjacent to the Plaza San Francisco in La Paz, Bolivia. #LaPaz #Bolivia #publicspace #lacallesoberana #sovereignstreet
Graffiti from the anarchafeminist group Mujeres Creando on a street in La Paz, Bolivia, reads "I want to rebel" and "I want to sin." #rebellion #sin #anarchism #feminism #anarchafeminism #graffiti #streetart #streetartphotography #artecallejero #lapaz #bolivia #sovereignstreet #lacallesoberana
The Plurinational Legislative Assembly building and the Plaza Murillo at twilight in La Paz, Bolivia. Since 2006, Bolivian legislators include women dressed "de pollera" (in traditional indigenous garb), helmeted miners, and dozens of grassroots leaders. Under 50% gender parity laws, Bolivia has a higher share of female legislators than all but one other country in the world. #Bolivia #asamblealegislativaplurinacional #PlazaMurillo #plurinationalstateofbolivia #plurinationalstate #publicspace #urbanphotography #urbanspace #publicsquare #pigeons #twilight #sovereigstreet #lacallesoberana
Supay mask from a Bolivian carnival shows design traces that are the legacy of three continents. on display at Musef, the National Museum of Ethnography and Folklore #Supay #devilmask #carnavaldeoruro #mask #Mascara #sovereignstreet #lacallesoberana